The Battle of Yorktown 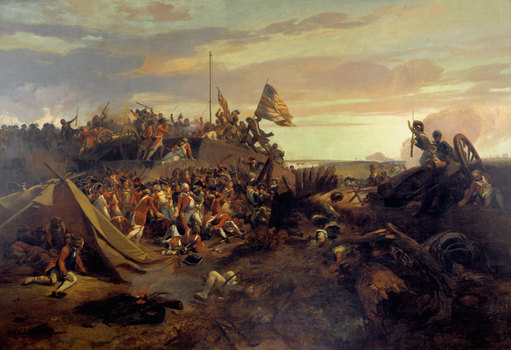 Charles Cornwallis, a British General, thought that a solid blow to the southern colonies would cripple the Americans enough to win the war. His target: Virginia.

Neither army was very well equipped, so they generally avoided each other. Then Continental reinforcements arrived. Lafayette chased Cornwallis and his army to the Eastern coast.

He had defensive trenches called redoubts set up around where they ended up (Yorktown), and on Gloucester Point on the other side of the York river. By positioning themselves on the bank, they hoped to be in a good position for reinforcements by sea, from New York.

Washington and a French General by the name of Jean-Baptiste Donatien de Vimeur, comte de Rochambeau reached Yorktown near late September in 1781.

The British had a force of about 7000 men, and the combined force of the Americans and French was about 15000. The travel to Yorktown had left the British low on food, exhausted, and mostly sick. Essentially, Cornwallis and his men were in really hot water.

The Patriots began to dig trenches as well, some 600 yards from Yorktown to place their artillery. The first attack came from the Patriots on Oct 9, 1781. Cornwallis' men couldn't fire back, they were too overwhelmed to even fire back for about an hour. The Americans later moved the trenches to 300 yards from Yorktown. On the 14th, they launched an attack on the British and claimed their last redoubts. On the 16th the British tried to regain lost ground, but they had to call a retreat.

Cornwallis' last hope was to cross the York river to launch a surprise attack on the smaller American forces there. That night (the 16th), a heavy thunderstorm began to brew, and the boats had to turn around.

With no other choices left, Cornwallis surrendered his forces on Oct 19, 1781.
Yorktown is considered one of the most important battles in the Revolutionary war. This is because it was the last major conflict. From this point, British support of the war slowly died out. Soon the Treaty of Paris (1783) officially ended the war.
Powered by